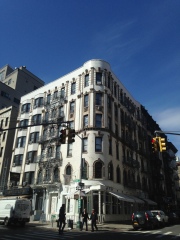 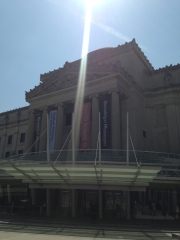 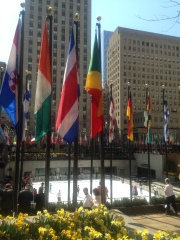 Humble brag: I recently had the fortune to go to the ‘city that never sleeps’ this Easter and had an absolute blast. After spending ten days there with my family I have by no means conquered the ‘big apple’ but I did have a taste of what it had to offer. This for me is the best of the city and if you’re lucky enough to get the opportunity to go to New York —  you definitely need to check out a couple of things on this list.

If you have a fear of heights this one may not be for you. The 41m tall bridge is a gorgeous way to see the city and also travel from Manhattan to Brooklyn (and vice visa). It’s free to enter so why not work off all the pizza pies you’ve eaten by walking the mile or so?

2. The ‘David Bowie Is’ exhibition

This one is a must for fans of Ziggy. The exhibition in Brooklyn has numerous costumes the Thin White Duke wore along with top-of-the-range headphones which allows Bowie himself to guide you round the museum in his charming twang. The exhibition has travelled from London and is open until 15th July so maybe blow all your dosh on traveling to the states to go see it? Be prepared to get a bit teary-eyed among complete strangers though as you watch Bowie preform ‘Rock ‘n’ Roll Suicide’ on screen.

I’m not one for musicals (unlike my siblings who constantly sing show-tunes round the house) yet I was converted to the camp side by Hamilton. The show was stellar and arguably the best musical on Broadway. Even if you’re not swayed on the whole musical front I would recommend going to see a show as there’s no other experience like it.

You might think that New York’s China Town is like any other city’s but remember that this is New York we’re talking about where everything is wackier and stranger. From unusual baby photos to waving cats to the best darn food you’ll ever eat, China Town is a wonderland that all English tourists will marvel at.

I would recommend all record collectors to stay away from New York unless you’re willing to spend a small fortune and have a very overweight suitcase on the flight home. Not only are there well-known stores such as Rough Trade which sells all the best new vinyl, but second-hand record shops are scattered all across NYC offering rare American records at a cheap price.

Ditch the boutiques and pick up a large basket as New York is the realm of classic vintage clothing stores. Brooklyn in particularly is a fashion lover’s dream — its speciality being the best retro band tees and every shade of Levi jeans you could want. I headed to Metropolis in Manhattan which I thoroughly recommended. Though a lot of the garments are on the pricey side, there are bargains out there just waiting to be found.

New York is famous for many things one of them being the ice rink outside the Rockefeller Centre. The seasonal rink, which is open October to early April, is the most picturesque place to make a fool of yourself whilst hundreds of judgmental New Yorkers watch on. The whole experience may be a tad expensive but remember you’ll be able to brag that you’ve skated at one of the most distinguished rinks in the world.

If you’re a sucker for a good deal then New York’s Flea Markets spread across Manhattan are the perfect spots for you. A quick google search will give you the best markets for whatever items (cough junk) you’re hunting for. Most markets have countless unique things for sale from Peewee Herman dolls to 60s jewellery so pop down for a root around- you never know what bric-a-brac you’ll come back with.

The Top of the Rock is for anyone who wants to feel like King Kong straddling the side of a building. The observation deck allows you to experience the heart of NYC from way up high as well as being the optimum photo location. Though this offers a great 360 degree view of the skyline of New York it may make you feel a bit dizzy.

Looking for a near death experience? Look no further than the notorious Coney Island home to several amusement parks that genuinely give you a thrill and may make your lunch reappear. The parks have been open since the late 1880s which adds a quaint historical atmosphere to the joint. Why not come on down and ride the oldest rollercoaster in America or try some pretty excellent hotdogs hey?